Each Ketubah is a limited edition offset lithograph, individually pencil signed and numbered by Mickie. If a text is no longer available, it will not appear in the drop-down menu of available texts below.

You can personalize this ketubah for an additional $95

The Rakefet Ketubah by Mickie Caspi features the Cyclamen, a herald of spring throughout the center and north of Israel. The quotes from the Song of Songs are enhanced by the beauty of these flowers, symbols of new beginnings. Fine gold foil accents glimmer like morning dew. The original artwork for the Rakefet Ketubah was created by Mickie using pen & ink and watercolor and then sent to Israel, where printed on archival lithographic paper.

For the B- Traditional Aramaic with Contemporary English (Orthodox) text, the two witnesses sign in both Hebrew & English.

Actual quotes from the Rakefet Ketubah

Marc Michael Epstein describes the Rakefet Ketubah and works by Mickie in general in his 2015 book, Skies of Parchment, Seas of Ink (which offers the first full survey of Jewish illuminated manuscripts, ranging from their origins in the Middle Ages to the present day), thusly:

“Examples by American artist… Mickie Caspi are among the best and brightest examples of motifs often found in ketubot from the late twentieth and early twenty-first centuries. Lush vegetation is the most common feature, and flowers, leaves and branches often frame the central text. In the Caspi ketubah, the rakefet, or cyclamen, a particularly delicate delicately arching flower, betokens modesty, beauty and grace. Alongside this image from the natural world, which specifically evokes the Israeli landscape, where the rakefet (designated the national flower of Israel) blooms throughout the center and north of the country from December to early May. Caspi quotes from Scripture – particularly and appropriately from the Song of Songs – about commitment and love between the couple that will, one hopes, radiate outward in their home, in the community, and in the world…”

There are no reviews yet.

Be the first to review “Rakefet Ketubah” Cancel reply

We can usually ship a personalized ketubah in as little as 24 hours. 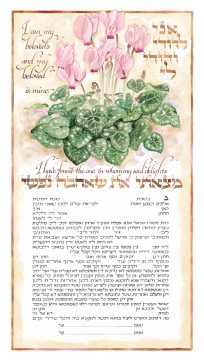