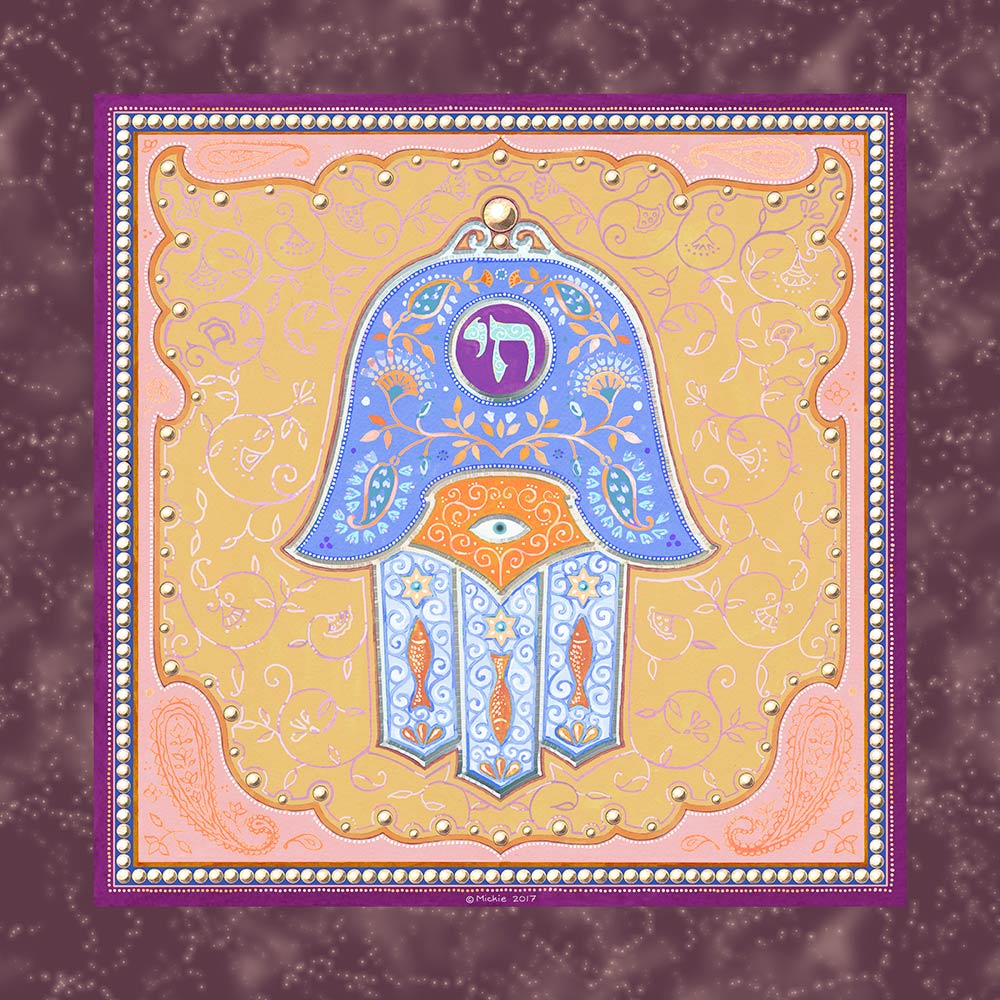 Although the Hamsa originated in the Middle East and predates the major Western religions, it has become a symbol of good luck in many societies throughout history. In all faiths, it is a protective sign and is reputed to bring its owner happiness, luck, health and good fortune.

The Hamsa design is derived from the Semitic word for ‘Five’ (Hamesh) and is represented by an open hand, often with a blue eye in its center. According to the Kabbalah (Jewish mysticism), the blue eye cannot lead to evil – it in fact creates a protective layer from evil. The fifth letter of the Hebrew alphabet is ‘Hey” one of the holy names of God. The Torah is comprised of the five books of Moses. 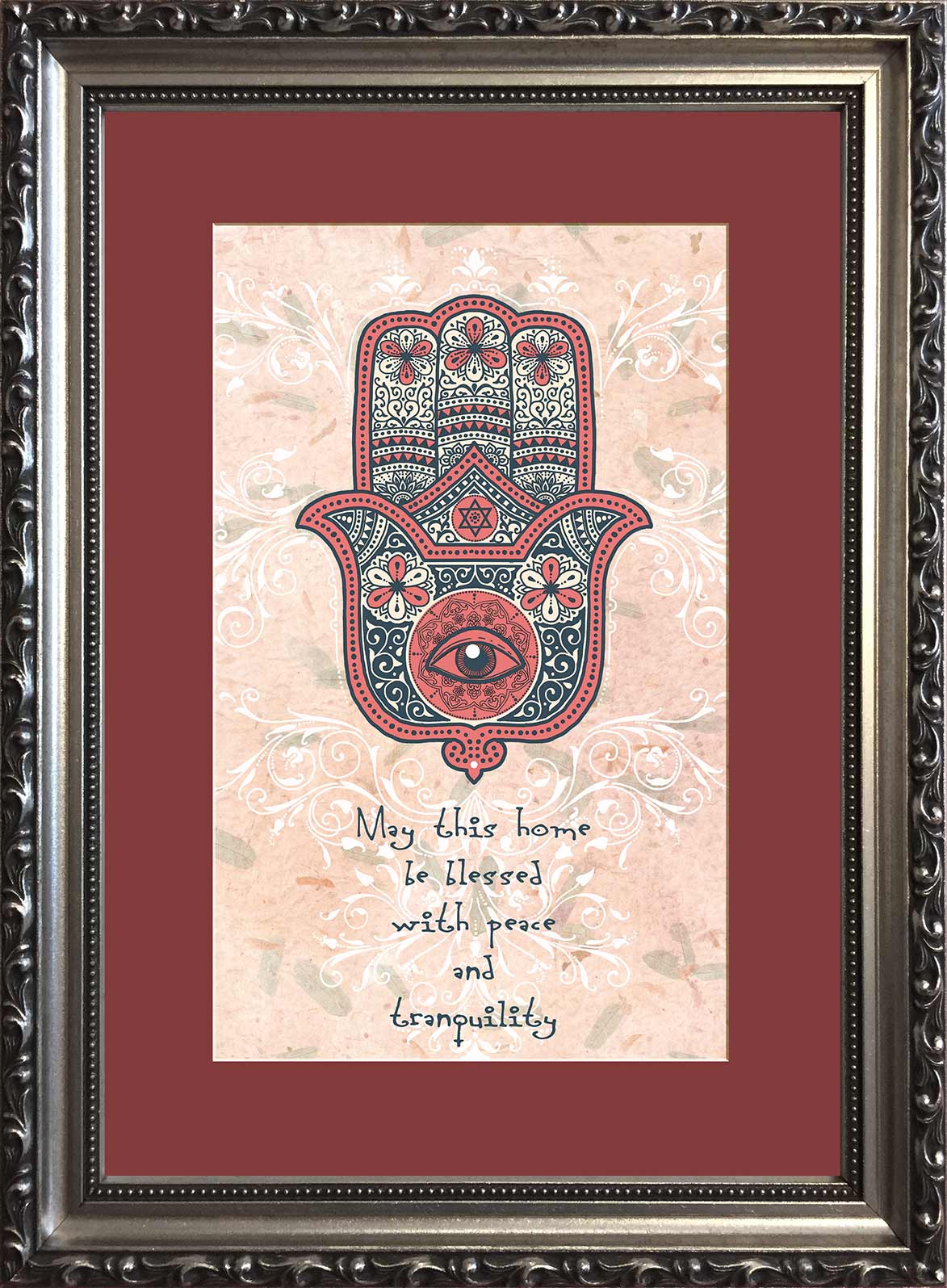 Many people hang a Hamsa somewhere in their home as an amulet to ward off the evil eye and protect the house and family from danger. The origins of the hamsa have been attributed to the Jewish, Islamic and Christian faiths, in addition to also being a Pagan fertility symbol, and this unknowing has increased its mystery. It has nonetheless become recognized today as an important symbol in Jewish and Kabbalistic art. 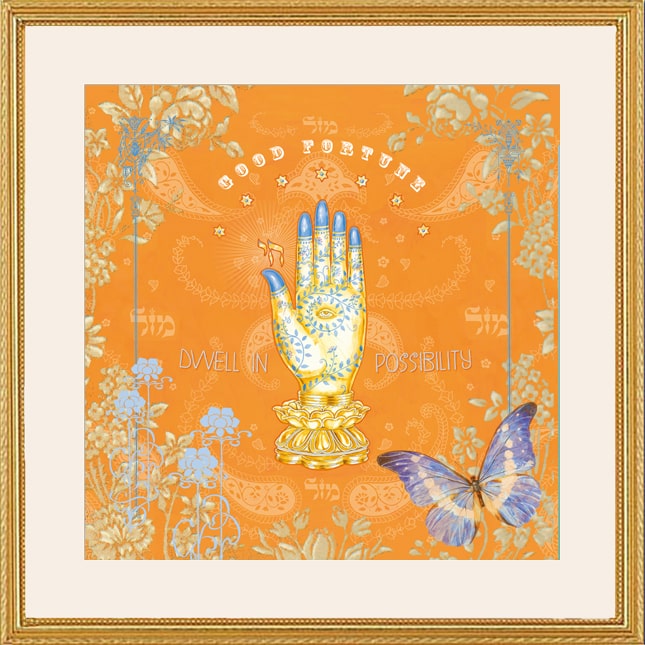 The symbol often appears in two main styles: sometimes it is shaped like a stylized hand with three fingers in the middle and two symmetrical thumbs on either side. It can also look like a regular hand with a thumb and a pinky finger. The Hamsa can appear (or be worn) with fingers facing up or fingers facing down. Both ways are acceptable. In addition to the eye, many hamsas feature images of fish. In the Talmud, the sage Rabbi Yossi Ben Hanina stated that the descendents of Joseph were blessed with multiplying like fish and like fish, are protected from the evil eye. He explained that the water covers the fish of the sea so that the eye has no power over them.

Other symbols appear on hamsas such as the Jewish star, birds, the word Mazal or Chai in Hebrew, the Tree Of Life, in addition to the Shema, the Travelers Prayer and Home Blessings.

In more recent years, the Hamsa has actually become a symbol of secularism, and is a very popular image for jewelry, amulets, wall hangings and artwork. It has become an incredibly trendy image for body art and tattoos and in Israel is as ubiquitous as the Star of David.

1 thought on “What is a Hamsa? Is a Hamsa Jewish?”