Caspi Cards is closed from September 24 to October 11 for the High Holidays. If you place an order, we will complete and ship it after October 12. We are so sorry that we cannot complete or ship any orders before then. You are a valued customer, and we look forward to promptly completing your order once we reopen after some much needed R&R. Mickie & Eran at Caspi Cards

Wedding Rituals differ by culture, country and customs. According to the NY Times, a “traditional Indian wedding can last days, and rituals include the bride kicking over a pot of rice and dance competitions between Team Bride and Team Groom.” Further, the Times reports that part of the ritual includes the bride and groom circling […] 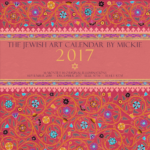 Although the Jewish New Year is still a month away, the new Jewish Art Calendar by Mickie for 2017 is available and ready for your enjoyment. Click on the Post Title to View the Actual Video Or view the Jewish Art Calendar Video at our Google+ Page #mickiecaspi #caspicardsandart #judaica #ketubah #ketubot #jewishart #jewishpride #calendar […]

Jerusalem 3D Sidewalk Art for Hol Hamoed Passover 2016 What is Hol Hamoed? It is the intermediate days of Passover (and Sukkot), sandwiched by the holy days at the beginning and end of Passover. In Israel, Pesach is 7 days long with 5 days of Hol. In the United States and elsewhere outside of Israel, […]

Same Sex Ketubah Text by Mickie Caspi The New York Times posted an article to the web, The Composer Andrew Lippa on the Upper West Side, By Joanne Kaufman on September 4, 2015. (A print version of this article appears on September 6, 2015, on page RE4 of the New York edition with the headline: […]

Whether or not you are a fan of Bernie Sanders, how often do we see a Jewish candidate for President of the United States? And how often do we hear the Jewish Sage, Hillel, paraphrased by that candidate’s wife, as Jane Sanders recently did? In a NY Times article covering a rally in Dubuque Iowa, Mrs. Sanders was interviewed. When asked why Mr. Sanders was attracting so many people, she added: “Because if not now, when? And if not him, who?”

What is a ketubah? Technically, it is a 2,000 year old document that is a pre-nuptial agreement laying out the responsibilities of the bride and groom entering the marriage. The ketubah was intended to protect the Jewish woman at a time when women had no rights on their own. It protected the wife in case […]

In 1990, Mickie created a work of art as a birthday gift for her mother. To honor her mom, Mickie incorporated Thelma’s original Parasha (Vayeshev) in a setting filled with bold, reddish-pinkish flowers on a luxurious blue background. Thelma was an artist in her own right, creating huge canvases filled with bright colors, shapes and […]

Mickie Caspi Ketubah MAZEL TOV ON YOUR WEDDING! A Mickie Caspi Ketubah is often the first work of art purchased by a couple as they embark upon a life together. All of my designs are original watercolor and/or gouache illuminations that are printed on fine archival modigliani paper in Israel using an offset lithographic process. […]